Home » Where Does Propane Come From?

Where Does Propane Come From? 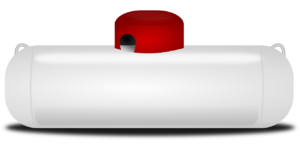 Scientifically speaking, propane is a hydrocarbon (C3H8). The gas is also referred to as liquefied petroleum gas, LP-gas, and LPG.

In layman’s terms, propane is one of the most widely-used fuels in America and can be utilized for a host of reasons, including:

Propane is plentiful, environmentally-friendly, and affordable, making it one of the most desirable options homeowners have for heating and cooling.

How is propane created?

A little known fact is that propane was not purposefully created. Rather, its energy density was discovered on accident by chemist Dr. Walter O. Snelling.

When Snelling was on his way home from a fueling station, he couldn’t help but notice the cork on his gas can kept popping off. After learning gasoline had volatiles in it, he discovered that if he could convert the fractionate — now known as propane — into an isolated liquid, he’d have an incredible new fuel source. The propane we have today is a by-product of natural gas processing and crude oil refining.

During natural gas processing, the liquid components recovered are:

By extracting propane from each process, the result is a cleaner, more dense energy source.

Where is propane found and stored?

Between 80-90% of propane consumed in the United States is produced domestically. (The other 10-20% of propane is mostly from Canada.) That means if you power your home with propane, each time you refill your tank you’re supporting the U.S. economy.

Some oil companies, like those located in North Dakota, Montana, Manitoba, and Saskatchewan, have natural gas processing plants located in their oil fields and separate the LPGs on-site.

If the hub is large enough, they may store their own propane, too. LPGs are typically stored in large underground salt caverns that were hollowed out in the 1940s, but some areas without suitable geology will use aboveground tanks.

How propane is transported and distributed

If a hub is not large enough to store their own propane, the transportation process begins. Propane is usually transferred through rail, truck, ship, or pipelines.

According to the Energy Information Administration (EIA), the distribution channels of propane are represented in the following image:

After storage, propane continues its journey through a pipeline to a pipeline terminal. Watch this animated video to see where propane pipelines run through the U.S.

Once at the pipeline terminal, propane will travel to retail plants across the nation. From there, individual companies either sell or transport propane for consumer homes.

Getting Propane to Your Home

Regardless of where the propane is found, getting it your home is simple. In fact, you can access a comprehensive list of all propane locations in the U.S. and Canada from the U.S. Department of Energy.

And, if you live in Connecticut, you can find your propane at Santa Energy.

Santa Energy is known for its dependable delivery, and it’s reliable customer service, meaning you’ll get your fuel or service promptly, no matter how bad the weather conditions are. You can also set up an automatic propane delivery, which means we’ll track the levels of your fuel, and send out a new delivery before your supply runs out.